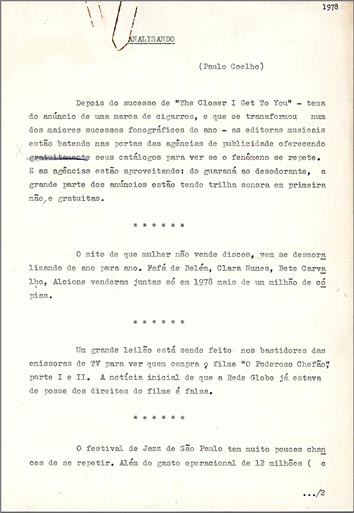 After the success of “The Closer I Get To You” – the theme of the commercial of a cigarette brand, and which has become one of the biggest recording hits of the year – music publishers are knocking on the doors of advertising agencies offering their catalogs to see if the phenomenon repeats itself. And the agencies are taking advantage: from guarana to deodorant, most ads are have soundtrack first hand, and free.

The myth that women don’t sell records has been discredited from year to year. Together, Fafá de Belem, Clara Nunes, Bete Carvalho, Alcione sold over one million copies in 1978 alone.

A big auction is being held behind the scenes of TV broadcasters to see who buys the movie “The Godfather”, part I and II. The initial news that Rede Globo was already in possession of the rights to the film is false.

The Jazz Festival of São Paulo has very little chance of repeating itself. In addition to the operating expenses of 12 million (the estimated budget was 8 million) being considered exaggerated by the sponsors, the artistic result also left much to be desired. No Brazilian musician has won any contract abroad.

The film about Sidney Magal begins shooting in the early days of November and its national release is scheduled for next year.

The song that put Lilian (from the former duo “Leno and Lilian”) back in the Brazilian music scene, “Eu Sou Rebelde”, is the main theme of the film “Cria Cuervos” by Carlos Saura, starring Geraldine Chaplin and awarded the Palme d’Or at the Berlin Film Festival.