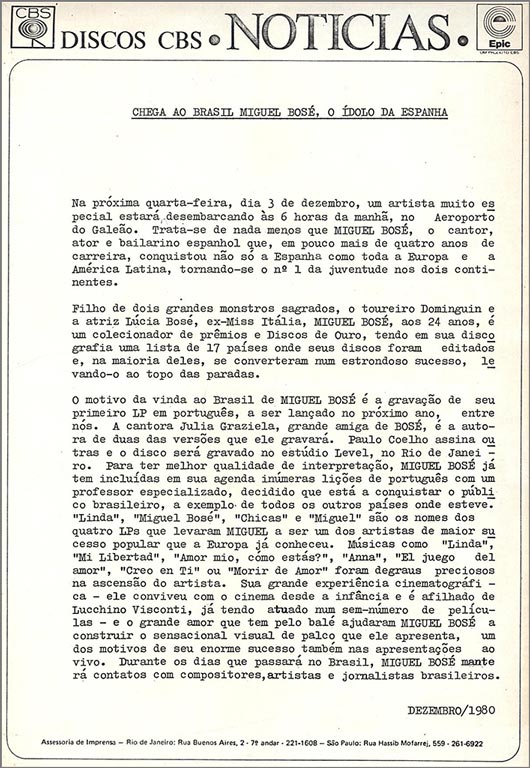 Miguel Bosé, the idol of Spain, arrives in Brazil

Next Wednesday, 3 December, a very special artist will disembark at 6 am, at Galeão Airport. He is nothing less than Miguel Bosé, the Spanish singer, actor and dancer who, in just over four years, conquered not only Spain but also the whole of Europe and Latin America, becoming the No. 1 of youth on both continents.

The son of two great sacred monsters, bullfighter Dominguin and actress Lucia Bosé, former Miss Italia, Miguel Bosé, at the age of 24, and a collector of awards and gold records, has his records published 17 countries and, in most of them he became an  overnight success, taking him to the top of the parades.

The reason for Bosé’s trip to Brazil is the recording of his first LP in Portuguese, to be released next year. Singer Julia Graziela, a close friend of Bosé authored two of the song adaptations he recorded. Paulo Coelho signs others and the album will be recorded at Level studio in Rio de Janeiro. To have a better quality of interpretation, Miguel Bosé has booked numerous Portuguese lessons with a specialised teacher, decided that he will conquer the Brazilian public like all the other countries where he was. “Linda”, “Miguel Bosé”, “Chicas” and “Miguel” are the names of the 4 LPs that led Miguel to become one of the most successful popular artists that Europe has ever known. Songs such as “Linda”, “Mi Libertad”, “Amor Mio, Como Estas”, “Anna”, El Juego del Amor”, “Creo em Ti” or “Morir de Amor” greatly contributed to the artist’s ascension. His great cinematic experience – he has lived with cinema since childhood, is the godson of Lucchino Visconti and has acted in a number of films – and the great love he has for ballet helped Miguel Bosé build his sensational stage look, one of the reasons for his huge success also in live performances. During his days in Brazil, Miguel Bosé will have contacts with Brazilian composers, artists and journalists.