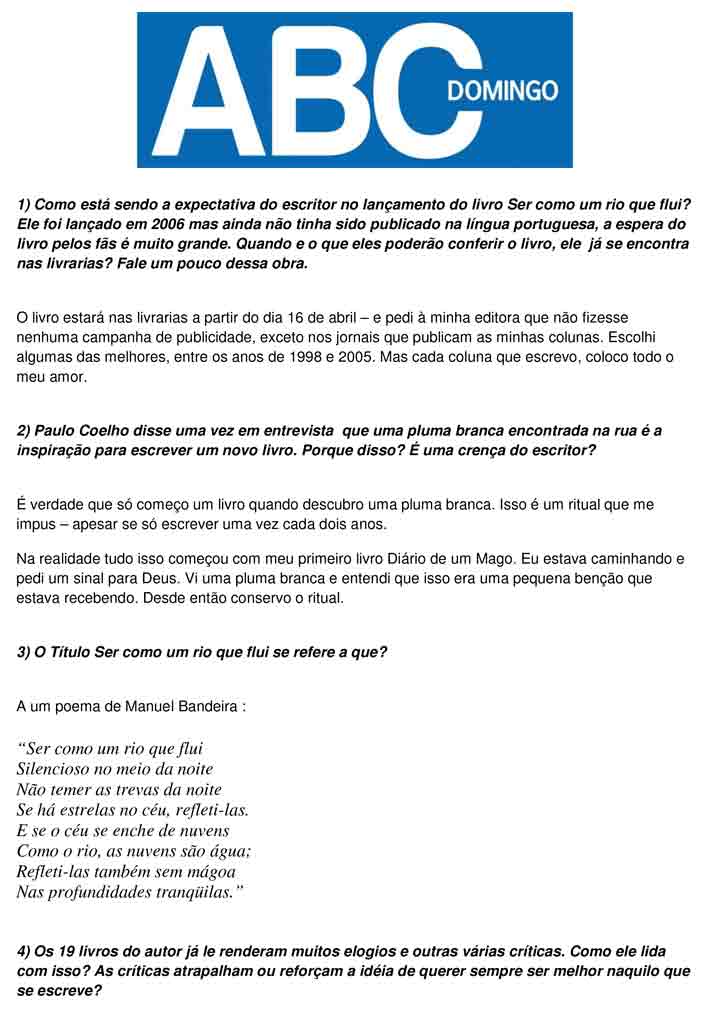 Interview with Brazilian (Rio Grande do Sul) Sunday newspaper ABC Domingo about the book Like the Flowing River. Dated 27 March 2009.

The book will be in bookstores starting on April 16 – and I asked my publisher not to do any advertising campaigns, except in the newspapers that publish my columns. I chose some of the best, between 1998 and 2005. But every column I write, I put all my love.

It is true that I only start a book when I discover a white feather. This is a ritual that I have imposed myself – even if I only write once every two years.

In reality it all started with my first book,The Pilgrimage. I was walking and asked for a sign to God. I saw a white feather and I understood that this was a small blessing that I was receiving. Since then I have kept the ritual.

To a poem by Manuel Bandeira:

Silent in the middle of the night

Do not fear the darkness of the night

If there are stars in the sky, reflect them.

And if the sky is filled with clouds

Reflect them also without sorrow

In the calm depths. ”

I think Alexandre Dumas was very good at summarising the role of the critic: “the more you stone me, the better – someone will build a pedestal with your stones”.

Inspiration is not something that strikes like lightning from the middle of nowhere – on the contrary, it is cultivated. And like any process, it takes us along paths that we didn’t know at the beginning. It has its rhythm and logic that is often totally beyond our expectations. In my case, when I start to write a book, I have a theme in my head but when I write I realise that the initial theme is sometimes not the main one – that it simply served as a gateway to the story.

It is normal then to find “echoes” in the work of a writer – the example of Jorge Luis Borges represents this well: story after story he tries to explain the inexplicable, to enter into a fiction that seems real and to show that our reality is fantastic …

Now, if you repeat it is something that only happens when you leave this process of inspiration and try to create a formula – that is – instead of planting a garden, you try to build a house and fold the world with one will. For me repetition is the daughter of poverty.

Who am I to pretend to say what the world is in need of!

What I do see is that he is dissatisfied – and for me this is good news: it shows that there are still reactions, that people are able to rebel against absurd rules.

There is no recipe – and in fact if I found one it would be the end of my writing mission. From the moment you find the recipe, you stop wondering. When this happens, it is the beginning of the end. You fall into a kind of cotton world – where everything seems to welcome but nothing really supports it.

My desire to be a writer has always existed, since I understand myself by people. My life for a long time was a struggle to achieve this: first against my parents (who thought I would do better by becoming an engineer), against society (which in Brazil always said that the literary career led nowhere) and finally against me really (I was afraid at the beginning of following the dream).

My pilgrimage to Santiago in 1986 changed that – I was able to wake up and leave the guilt and fear behind. I discovered that insecurity was a powerful ally: only when you really know the price to pay for your dream, and that you choose to take the risk, does life really begin.

The greatest responsibility is the same as any human being on this planet: respecting the dignity of others.

– Is your home currently in Rio de Janeiro? How do you deal with fan harassment? Can

Yes, I live in Rio and I don’t feel this “harassment”. On the contrary, I like the contact with my readers and it is from this curiosity that all my actions on the internet were born – my blog on G1, my blog in English (paulocoelhoblog.com), my profile on myspace and facebook, etc.

My wife, Christina Oiticica, is a painter and also travels a lot. We have always had respect for the work of others and so we always knew how to have that balance between family life and work.

Anyway, as I answered the other day on my blog to a reader, I made my life my job and so I never feel like I’m leaving something aside.

It is impossible to give an answer to this question – my books are like my children, impossible to choose one. Each book is a portrait of another self, of a person I was and who at a specific moment felt the need to know more.

In relation to a legacy – I am the least objective person to be able to answer about it. I would therefore like people to remember me as someone who died while alive. Unfortunately many people die in life because they destroy what is most valuable: their dreams. I try to honour mine and that’s why I think every moment has its relevance. Any detail can be striking if we simply let life enter us.

I believe in a better world: one that would be governed by the true passions that exist in each man. What makes the world around us seem disappointing – is our own hypocrisy. If we left our intuition and what animates us to be the pillars of our society, we would certainly be more fulfilled.

I don’t believe in messages much. But having said that, if I must leave a message here, I would like to say that they do not believe without questioning, that they do not speak without first having heard, that they do not judge before having understood the other, and that they love – the love that devours. And I take great pleasure in writing the columns published here.