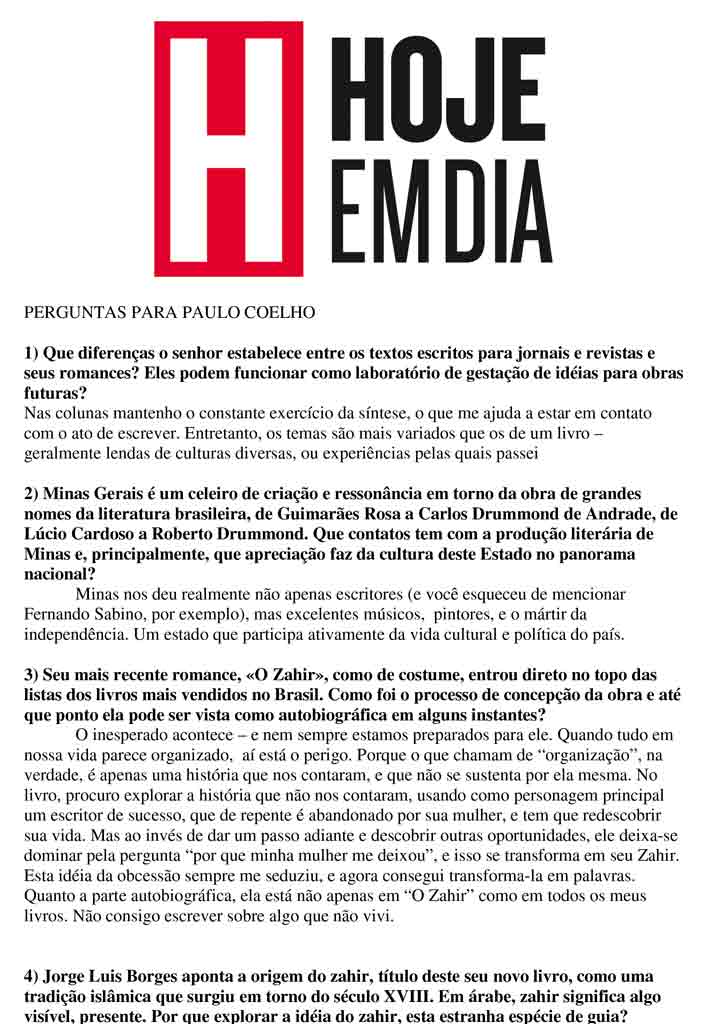 Interview for Brazilian newspaper Hoje Em Dia about the book The Zahir.

In the columns I keep the constant exercise of synthesis, which helps me to be in contact with the act of writing. However, the themes are more varied than those of a book – usually legends of different cultures, or experiences I went through.

Minas really gave us not only writers (and you forgot to mention Fernando Sabino, for example), but excellent musicians, painters, and the independence martyr. A state that actively participates in the country’s cultural and political life.

The unexpected happens – and we are not always prepared for it. When everything in our life seems organised, there is the danger. Because what they call “organisation”, in fact, is just a story that they told us, and that does not support itself. In the book, I try to explore the story they didn’t tell us, using as a main character a successful writer, who is suddenly abandoned by his wife, and has to rediscover his life. But instead of taking a step forward and discovering other opportunities, he lets himself be dominated by the question “why did my wife leave me”, and that becomes his Zahir. This idea of ​​obsession has always seduced me, and now I have managed to put it into words. As for the autobiographical part, it is not only in “The Zahir” but in all my books. I can’t write about something I haven’t experienced.

We have all of our Zahirs in life – things that negatively focus our attention, but which we cannot get rid of. It is very different from the concept of personal legend – a dream that must be fulfilled, but that requires us to adapt, and above all, joy.

As for Iraq, Bush and his advisers have entered a minefield – and now it will be very difficult to leave. But it is superficial to generalise, and to start to develop an anti-American feeling.

In the columns, I divide my day-to-day. In the case of books, I never think about the themes – they choose me. I usually need two years to let something new mature.

The same as any responsible citizen: fight for everyone to accept that they are responsible for the future of the planet.