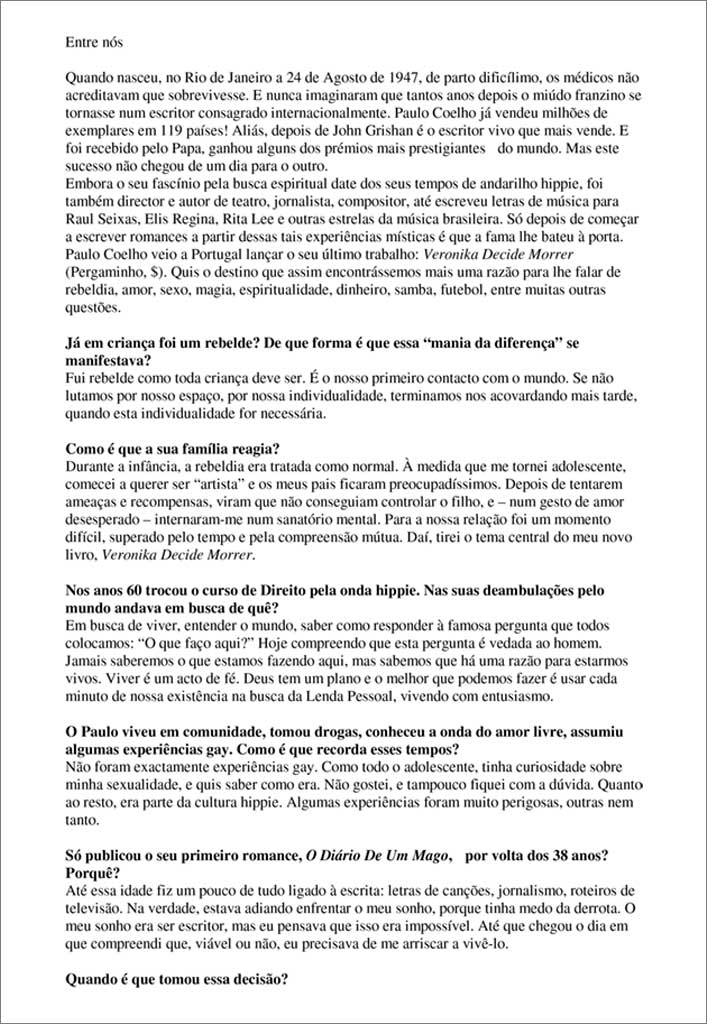 I was rebellious as every child should be. It is our first contact with the world. If we don’t fight for our space, for our individuality, we end up chickening out later, when this individuality is necessary.

During childhood, rebellion was treated as normal. As I became a teenager, I started wanting to be an “artist” and my parents were very worried. After trying threats and rewards, they saw that they couldn’t control their son, and – in a gesture of desperate love – they put me in a mental hospital. It was a difficult time for our relationship, overcome by time and mutual understanding. Then, I took the central theme of my new book, Veronika Decides to Die.

In search of living, understanding the world, knowing how to answer the famous question we all ask: “What do I do here?” Today I understand that this question is forbidden to man. We will never know what we are doing here, but we know that there is a reason for us to be alive. Living is an act of faith. God has a plan and the best we can do is to use every minute of our existence in the search for the Personal Legend, living with enthusiasm.

These were not exactly gay experiences. Like any teenager, I was curious about my sexuality, and wanted to know what it was like. I didn’t like it, nor did I have the doubt. As for the rest, it was part of the hippie culture. Some experiences were very dangerous, others less so.

Until that age, I did a little bit of everything related to writing: song lyrics, journalism, television scripts. In fact, I was putting off facing my dream because I was afraid of defeat. My dream was to be a writer, but I thought that was impossible. Until the day came when I realised that, viable or not, I needed to risk living it.

After having made the pilgrimage to Santiago de Compostela, in 1986. That was when I understood that wisdom resided in the hearts of ordinary people and it was just a matter of being aware of what is going on around us.

When you fight for a dream, you are willing to die for it. If not, it is not your true dream.

In fact, I write to understand myself. Readers are the traveling companions and we share our views and doubts.

No. They are important, with or without my books. And their lives have meaning, regardless of how they understand it.

It’s natural. But this is the vanguard of thought – and every vanguard has to, at a certain moment, face prejudice.

Of course it matters, but unfortunately in the opposite direction. North American pseudo-moralism imposes itself more and more, as if we were going back to the Victorian era. I hope that Europe will be able to counter that.

There is only one piece of advice: be brave. Besides, each one has his own way and needs to take his risks. We are companions, navigators in an unknown sea and all that counts is our own experience.

Several, but I try to ignore these issues. My agent knows more about these things. I am a writer, my pleasure is in words, in books.

In terms of money, in the most conservative way possible, because I don’t want to keep track of investments. With regard to the true fortune that international success gives – the ability to meet people, to never feel foreign, no matter where I am – this I use to the maximum.

I like Copacabana because it is a city, it is not an imitation. But I hate samba, I just go to the beach to walk and I think carnival is silly – it’s like forcing everyone to be happy for four days.

On the contrary! Success gave me more freedom, allowed me to go places, walk paths and meet people who, under other circumstances, would not have the chance.

A warrior of the light does not imagine his future nor does he think about the past. I live my present.

A very particular question, which I don’t want to answer.

I follow an absolutely feminine process, like any creative process. I make love to life and one day I have a son. But I am not thinking, taking notes – just as a mother is not thinking “I will put two ears, a nose, etc …”

It is not exactly like that. I travel a lot, but when I am in Brazil, I am with family and friends. I work like any other human being and I would be ashamed if I didn’t work. I have fun with the Internet, the arcade (pinball or flippers, if you prefer), walking, talking.

Respect for the freedom of others.

She was the first person to ask me for an autograph. Every year, on St. Joseph’s Day, my patron, I throw a party here at home for my friends. As I cannot invite all readers, I invite Maria Inês, who represents them.

Portugal gave me the big message: “sailing is necessary, living is not necessary”.