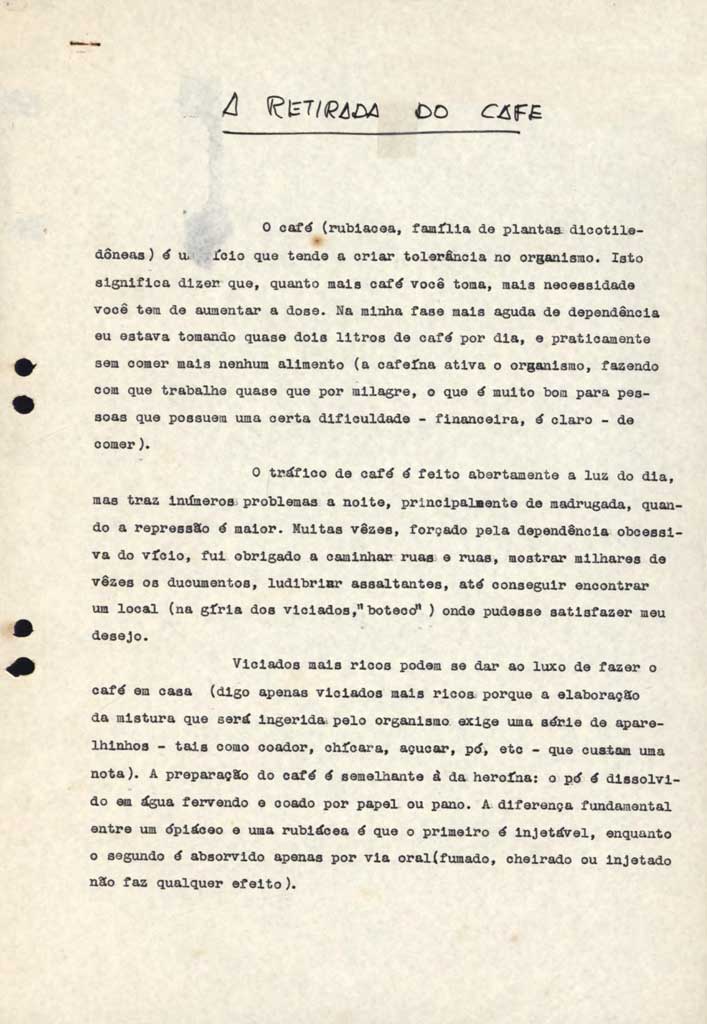 Chronicle about cafeine withdrawal … below is the translation of page 1:

Coffee (rubiacea, family of dicotyledonous plants) is a habit that tends to create tolerance in the organism. This means that the more coffee you take, the more you need to increase the dose. In my most acute phase of dependence I was drinking almost two liters of coffee a day, and practically stopped eating (caffeine activates the body, making it work almost miraculously, which is very good for people who have a certain difficulty – financial, of course – to eat).

The traffic of coffee is done in broad daylight, but it brings numerous problems at night, especially at dawn, when the need is greater. Often forced by obsessive dependence on my addiction, I was forced to walk the street after street, show my ID thousands of times, deceive burglars, until I found a place (in the jargon of addicts, “boteco”) where I could satisfy my desire.

Richer addicts can afford to make coffee at home (I say only richer addicts because the elaboration of the mixture that will be ingested by the body requires a series of little gadgets – such as a strainer, sugar, powder, etc. – which cost a few bills). The preparation of coffee is similar to that of heroin: the powder is dissolved in boiling water and strained through paper or cloth. The fundamental difference between an opiate and a rubiacea is that the former is injectable, while the latter is only absorbed orally (smoking, smelling or injecting has no effect).