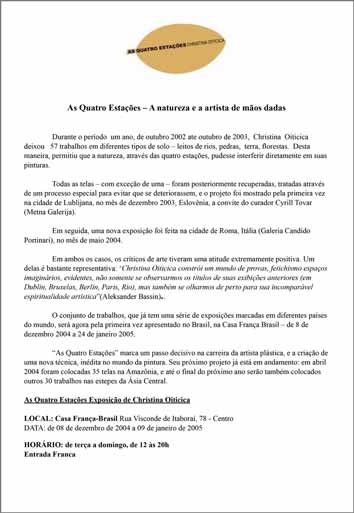 (translation) The Four Seasons – Nature and the artist hand in hand

During a one-year period, from October 2002 to October 2003, Christina Oiticica left 57 works on different types of soil – riverbeds, rocks, earth, forests. In this way, she allowed nature, through the four seasons, to directly interfere on her paintings.

All the canvases – except one – were later recovered, treated with a special process to prevent them from deteriorating, and the project was shown for the first time in the city of Ljubljana, Slovenia, in December 2003, at the invitation of the curator Cyrill Tovar
(Metna Galerija). It was followed by another exhibition in Rome, Italy (Gallery Candido Portinari), in May 2004.

In both cases, art critics had an extremely positive attitude. One of them is quite representative: ‘Christina Oiticica builds a world of proofs, fetishism, imaginary spaces, evident, not only if we look at the titles of her previous exhibitions (in Dublin, Brussels, Berlin, Paris, Rio), but also if we look closely for his incomparable artistic spirituality” (Aleksander Bassin).

The group of works, which already has a series of exhibitions scheduled in different countries around the world, will now be presented for the first time in Brazil, at Casa França Brasil – from December 8, 2004 to January 24, 2005.
“As Quatro Estações” marks a decisive step in the artist’s career, and the creation of a new technique, unprecedented in the world of painting. Her next project is already underway: in April 2004 35 canvases were placed in the Amazon region, and by the end of next year another 30 works will also be placed in the steppes of Central Asia.