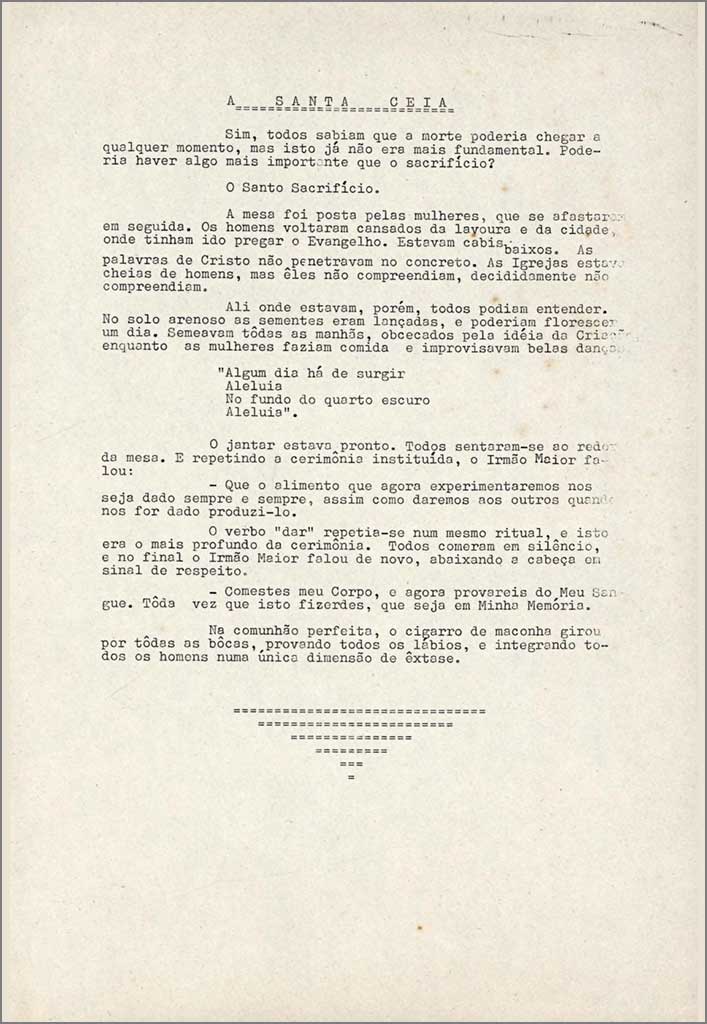 The Holy Supper | A Santa Ceia

Yes, everyone knew that death could come at any moment, but that was no longer important. Could there be anything more important than sacrifice?

The Holy Sacrifice.
The table was laid by the women, who then left. The men returned tired of farming and the city, where they had gone to preach the Gospel. They were disillusioned. The words of Christ did not penetrate the concrete. The churches were full of men, but they did not understand, decidedly did not understand.

Where they were now, however, everyone could understand. In the sandy soil the seeds were thrown, and could bloom one day. They sowed every morning, obsessed with the idea of ​​the Creation while the women made food and improvised beautiful dances.

“Someday there will be light
Hallelujah
in their place of darkness
Hallelujah”.

Dinner was ready. Everyone sat down to the round table. And repeating the established ceremony, the Elder Brother said: may the food we now eat will be given to us every day and always, just as we will give to others when we have the opportunity to produce it.

The verb “to give” was repeated in the same ritual, and this was the most important part of the ceremony. Everyone ate in silence, and in the end the Big Brother spoke again, bowing his head in a sign of respect. You have eaten my Body, and now you will taste of My Blood. Whenever you do this, may it be in My Memory.

In perfect communion, the marijuana joint was passed to every mouth, tasting all the lips, and joining all men into one dimension of ecstasy.