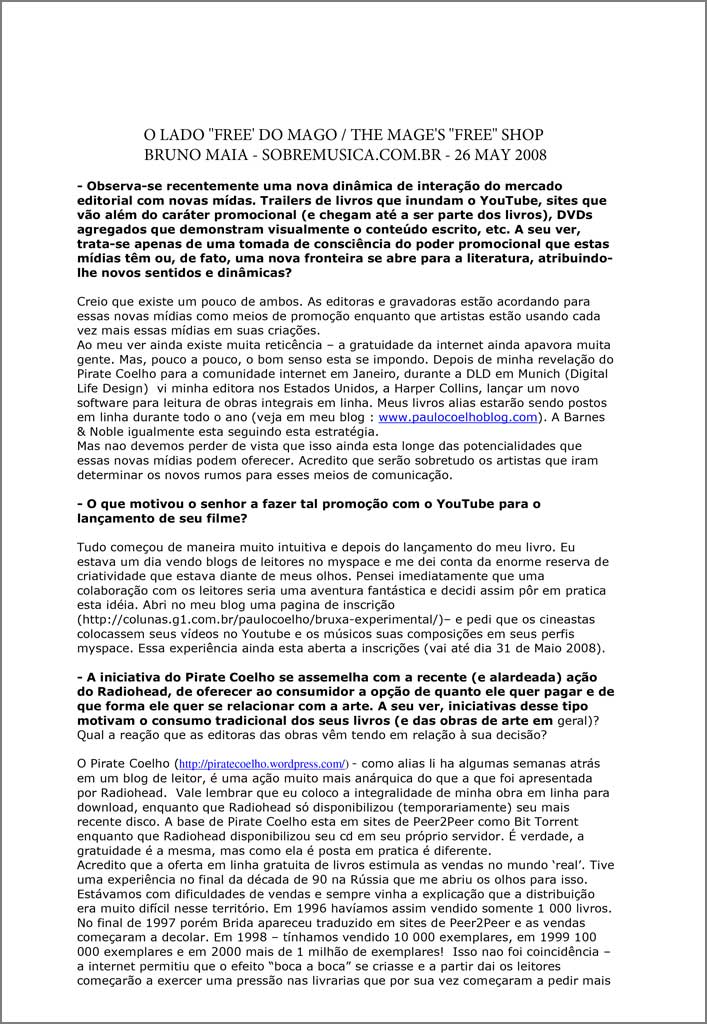 A new dynamics of interaction of the publishing market with new measures have been recently observed. Trailers of books that flooded or YouTube, sites that will add a promotional character (and I have attached two books to be part of), added DVDs that show visually or written content, etc. As you see, is it just a matter taken from the awareness of the promotional power that these media have, or a new frontier opens up to literature, attributing to it new senses and dynamics?

I think there is a little of both. Publishers and engravers are agreeing for these new media as promotional media, so far as artists are using more and more media in their creations.

As I see it, there is still a lot of reluctance – a free internet still scares a lot of people. But, little by little, good sense prevailed. After my revelation of Pirate Coelho for the internet community in Janeiro, during DLD in Munich (Digital Life Design) I saw my publisher in the United States, Harper Collins, launch a new software for the reading of integrated works on the web. My books will be put online throughout or year (see my blog: www.paulocoelhoblog.com). Barnes & Noble is also following this strategy.

But we must not lose sight of the fact that this long-standing potentiality is added because of these new mediums. I certify that it will be above all the artists who will determine new ideas for this communication.

What motivated you to make such a promotion with YouTube for the release of your film?

It all started very intuitively and after the launch of my book. One day I was reading readers’ blogs on myspace and I realised the huge reserve of creativity that was before my eyes. I immediately thought that a collaboration with the readers would be a fantastic adventure and decided to put this idea into practice. I opened a registration page on my blog – and asked the filmmakers to put their videos on Youtube and the musicians their compositions on their myspace profiles. This experience is still open for registration (until May 31, 2008).

Pirate Coelho’s initiative is similar to Radiohead’s recent (and vaunted) action, offering consumers the option of how much they want to pay and how they want to relate to art. Do you think such initiatives motivate the traditional consumption of your books (and works of art in general)? What reaction have the publishers of the works been having towards your decision?

Pirate Coelho – as I read a few weeks ago on a reader blog, is a much more anarchic action than the one presented by Radiohead. It is worth remembering that I put my entire work online for download, while Radiohead only (temporarily) released their latest album. Pirate Coelho’s base is on Peer2Peer sites as BitTorrent while Radiohead made their CD available on their own server. It is true, the gratuity is the same, but how it is put into practice is different.

I believe that the free online book offering stimulates sales in the ‘real’ world. I had an experience in the late 90s in Russia that opened my eyes to that. We were having sales difficulties and there was always the explanation that distribution was very difficult in that territory. In 1996 we had thus sold only 1,000 books. In late 1997, however, Brida appeared translated on Peer2Peer websites and sales started to take off. In 1998 – we had sold 10,000 copies, in 1999 100,000 copies and in 2000 more than 1 million copies! This was no coincidence – the internet allowed the “word of mouth” effect to be created and from then on, readers will start putting pressure on bookstores, which in turn started asking for more copies … I don’t know if this applies to music – since the mp3 format itself has already supplanted the need for the physical object of the CD.

Regarding my publishers – they are all accepting my decision.

Are these multimedia developments a natural path for the literary writer of this century? Could there be a change in the dynamics of the creation process due to devices like these?

I cannot predict how the new media will influence literary work in the 21st century. What I can say is that we are already seeing more interactivity between readers and authors. The emergence of blogs allows this exchange, which in my view is extremely enriching.

But I don’t totally believe in a collective creation process when it comes to writing a book. I saw experiences in which readers felt during an author’s creative process and found the result very weak.

I believe in interactivity once the work is finished by its creator, not before.

Do you think that initiatives such as book trailers – which already bring some of the scenes of the work, including actors on the scene – can interfere with the power of imagination and the particularisation of interpretations that, for many, are the great timeless weapons of literature?

I think book trailers should be like good movie trailers – something that piques curiosity and not something that reveals everything. I think that if trailers are made with tact and sensitivity, they will in no way interfere with the readers’ power of imagination.

Recently, HP, who are our main sponsor in the Experimental Witch project, made a trailer for the participants that put this idea into practice. See the video below, under Related Media.