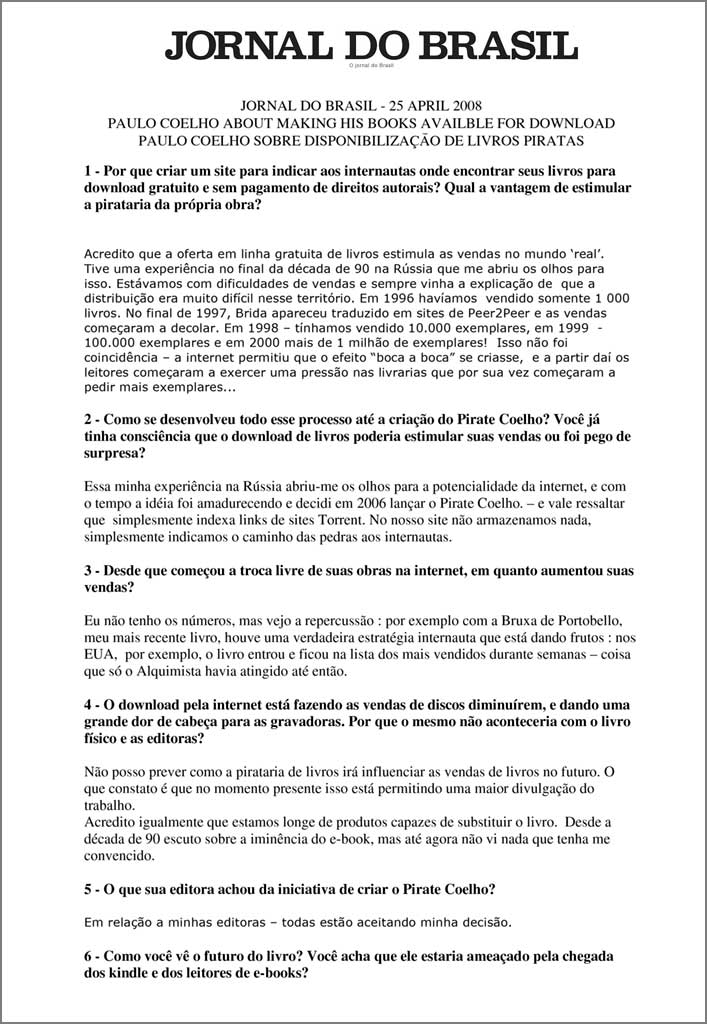 Date: 25 April 2008
Interview with Jornal do Brasil about making his books available for download.

I believe that the free online book offering stimulates sales in the ‘real’ world. I had an experience in the late 90s in Russia that opened my eyes to that. We were having sales difficulties and there was always the explanation that distribution was very difficult in that territory. In 1996 we had sold only 1,000 books. In late 1997, Brida appeared translated on Peer2Peer websites and sales started to take off. In 1998 – we had sold 10,000 copies, in 1999 – 100,000 copies and in 2000 more than 1 million copies! This was no coincidence – the internet allowed the “word of mouth” effect to be created, and from then on, readers began to put pressure on bookstores, which in turn began to ask for more copies …

My experience in Russia opened my eyes to the potential of the internet, and with

the idea matured and I decided in 2006 to launch Pirate Coelho. – and it is worth mentioning that it simply indexes links from Torrent sites. On our website we do not store anything, we simply indicate the path of the stones to internet users.

I don’t have the numbers, but I see the repercussion: for example with the Witch of Portobello, my most recent book, there was a real internet strategy that is bearing fruit: in the USA, for example, the book entered and was on the bestseller list for weeks – something that only the Alchemist had achieved so far.

I cannot predict how book piracy will influence book sales in the future. What I see is that at the present time this is allowing for greater dissemination of the work.

I also believe that we are far from products capable of replacing the book. Since the 90’s I have heard about the imminence of the e-book, but so far I have not seen anything that has convinced me.

Regarding my publishers – they are all accepting my decision.

When I gave my conference at the DLD event in Munich in January, I came across a very interesting idea: that the future of the book may not be found in objects like kindle or e-books – but in the interactivity between readers and authors in around the book. There are people thinking about what “circulates” around the book and there are even those who predict what people will pay in the future which will not be access to the book – but access to discussion around the book. We see this today with online video games – the person pays an “x” to participate in the game universe – perhaps the future of the book is there.

I cannot predict how the new media will influence literary work in the 21st century. What I can say is that we are already seeing more interactivity between readers and authors. The emergence of blogs allows this exchange, which in my view is extremely enriching.

But I don’t totally believe in a collective creation process when writing a book. I saw experiences in which readers felt during an author’s creative process and found the result very weak.

I believe in interactivity once the work was completed by its creator, not before.

Articles generated by the conference in the DLD.