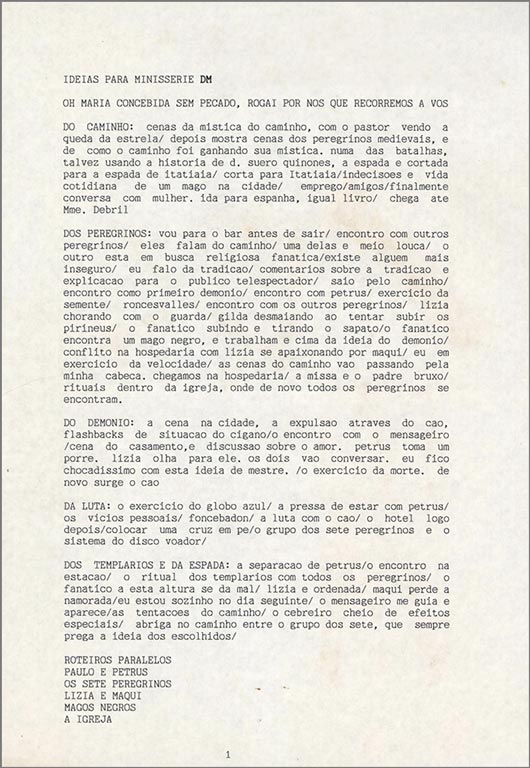 Ideas for a miniseries based on The Pilgrimage

Ideas about a miniseries based on the book “The Pilgrimage”.

Mystical scenes, a shepherd seeing a falling star, scenes of medieval pilgrims, a battle, a sword, indecisions and the daily life of a wizard in the city (job, friends, a conversation with a woman) and his going to Spain.

“Meeting in a bar with other pilgrims, talk about the pilgrimage, some quite mad, others in a fanatic religious search, and a few a little insecure about it.

Talk about tradition (explaining to the audience).

Back on the path, a meeting with the first demon, meeting with Petrus, the seed exercise, meeting with other pilgrims, roncesvalles, Lizia crying with the guard, Gilda fainting when trying to climb to Pyrenees, the fanatic climbing up and then taking off his shoe, the fanatic meets a black magician and work on the Devil’s idea, a conflict at the inn with Lizia falling in love with Maqui, I (Paulo Coelho) in the speed exercise, the path’s scenes rushing through my mind. We arrive at the inn, where once again all the pilgrims meet.”

“The city scene, the expulsion through the dog, flashbacks on the gypsy’s situation, a meeting with a messenger, a scene oh the wedding, a discussion about love. Petrus gets drunk, Lizia looks at him and both of them initiate a conversation. I’m deeply shocked with the master’s idea, the Death’s exercise. The dog remakes an appearance.”

“The blue globe’s exercise, the hurry to be with Petrus, the personal addictions, foncebadon, the fight with the dog, the hotel, a standing cross, the seven pilgrim’s group and the flying saucer system.”

The Templars and the Sword:

“Petrus’s separation, the meeting at the station, the templars’s ritual with all the pilgrims, the fanatic ends up badly, Lizia is ordered, Maqui loses his girlfriend, I am alone the following day, the messenger guides me, the path’s temptations, special effects, the preached idea of the chosen ones.