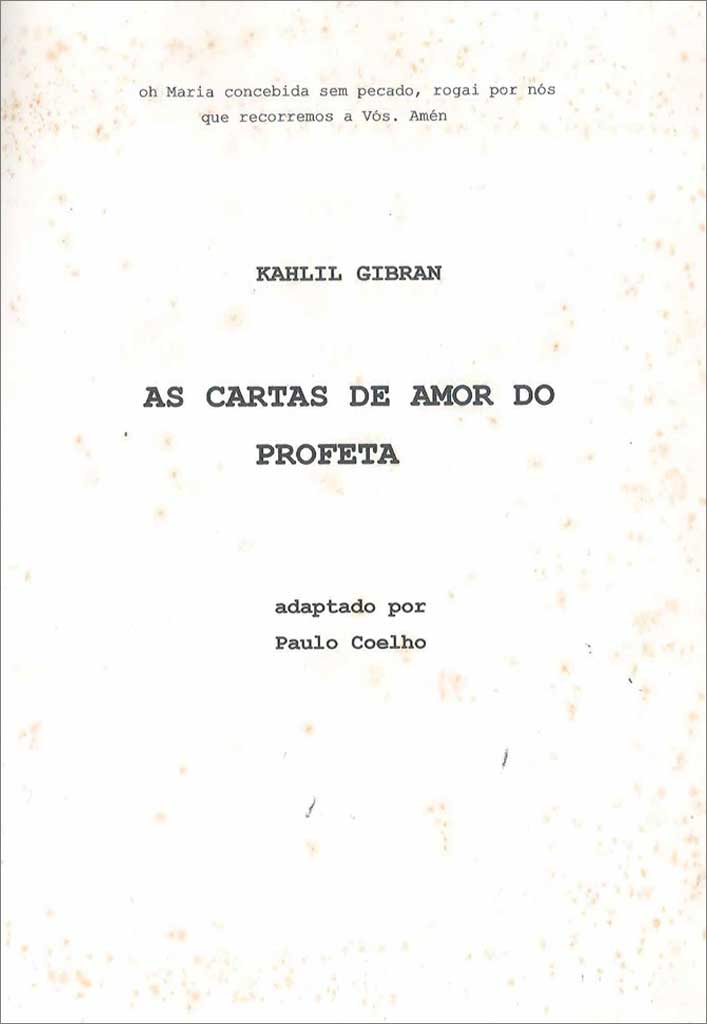 Love Letters from a Prophet, adaptation by Paulo Coelho

Manuscript of Paulo Coelho’s 1997 adaptation of Kahlil Gibran’s “The Prophet”. Below is a translation of page 2 of the manuscript.

NOTE TO SELF
I decided to translate and adapt this book in the period from the end of January, beginning of February 1997. I was in what I called a “sabbatical year”, in the process of internal and external transformation, going through many changes (publisher, apartment, etc.) and a need for adaptation. During this sabbatical year, I wanted to do nothing, but that is difficult. Today, when writing this, on 07/03/97 at 4:11 I already changed my view. I will continue my sabbatical, but will be more open to wisdom and not so much the rigor

The book was given to me by Soula Saad, before (I think) our trip to Lebanon. It was left on the shelf for a while but when I did get to it – much like The Supreme Gift – I started translating it. I saw a different Gibran, more human and with shortcomings much like me. I saw a Mary who, in the background, is the significant reason for “The Prophet”. I don’t know if I make this clear in the adaptation, but at least it’s my vision of things.

In the period of finalisation, during the carnival, Monica and Oyvind were here. Oyvind asked me what I thought about just cutting things. I said it was the same thing that Michelangelo did with the marble.

While writing these lines, it seemed to me it took me a long time to do the translation/adaptation even though it took less than a month. The originals are with Ediouro, but the contract has not yet been signed. They plan to launch during the Biennial. I’m releasing the Manual of the Warrior of the Light in April and I think it is very close. Depending on how I feel, I could postpone the launch to December.

I have no idea what will happen, but I think it is important to show this correspondence to the Brazilian public. Monica is also offering it to publishers abroad and this made us look differently at “The Supreme Gift” which was forgotten on the shelf.

May it be all for the greatness of God, is what I am reminded of these days.