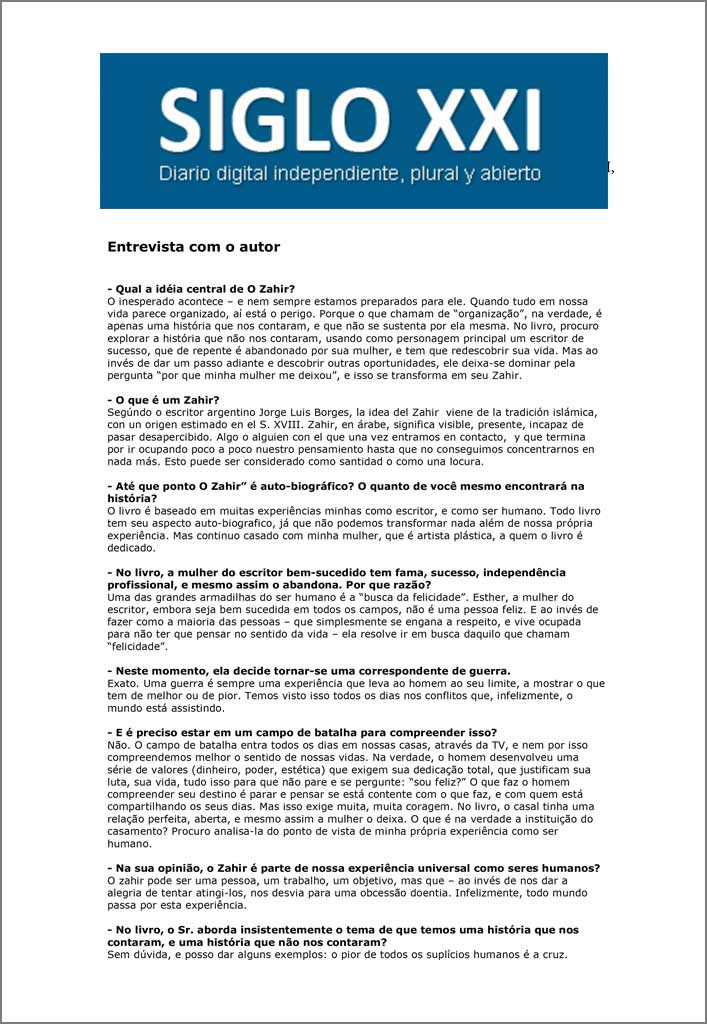 Translation into Portuguese of the interview in Spanish about The Zahir, published on diariosigloxxi.com on 9 Jul 2006.

The unexpected happens – and we are not always prepared for it. When everything in our life seems organized, there is the danger. Because what they call “organization”, in fact, is just a story that they told us, and that does not support itself. In the book, I try to explore the story they didn’t tell us, using as a main character a successful writer, who is suddenly abandoned by his wife, and has to rediscover his life. But instead of taking a step forward and discovering other opportunities, he lets himself be dominated by the question “why did my wife leave me”, and that becomes his Zahir.

According to the Argentine writer Jorge Luis Borges, the idea of ​​Zahir comes from the Islamic tradition, with an estimated origin in the 18th century. Zahir, in Arabic, means visible, present, unable to remain unnoticed. Something with someone that we once got in touch with, and ends up occupying little by little our thought until we can’t concentrate on anything bad. This can be considered as holiness or as a madness.

The book is based on many of my experiences as a writer, and as a human being. Every book has its auto-biographical aspect, since we cannot transform anything beyond our own experience. But I am still married to my wife, who is an artist, to whom the book is dedicated.

One of the great pitfalls of the human being is the “search for happiness”. Esther, the writer’s wife, although successful in all fields, is not a happy person. And instead of doing like most people – who are simply wrong about it, and are busy not having to think about the meaning of life – she decides to go in search of what they call “happiness”.

Exact. A war is always an experience that takes man to his limit, showing what is best or worst. We have seen this every day in the conflicts that, unfortunately, the world is watching.

No. The battlefield enters our homes every day, through TV, and that is not why we understand the meaning of our lives better. In fact, man has developed a series of values ​​(money, power, aesthetics) that demand his total dedication, that justify his struggle, his life, all so that he doesn’t stop and ask himself: “am I happy?” What makes man understand his destiny is to stop and think if he is happy with what he does, and with whom he is sharing his days. But it takes a lot, a lot of courage. In the book, the couple had a perfect, open relationship, and yet the woman leaves him.

What is the institution of marriage really? I try to analyse it from the point of view of my own experience as a human being.

The Zahir can be a person, a job, a goal, but that – instead of giving us the joy of trying to reach them, it diverts us to an unhealthy obsession. Unfortunately, everyone goes through this experience.

Without a doubt, and I can give some examples: the worst of all human torment is the cross.

I remember reading in Cicero that it was an “abominable punishment”, causing horrible suffering before death came. And yet, nowadays people carry it on their chests, put it on their bedroom wall, started to identify it as a religious symbol, forgot that they are facing an instrument of torture. Just to mention one more Christian example: the tree that we all have at home during the holidays. Saint Boniface decided to “Christianise” a ritual dedicated to honouring the god Odin when he was a boy: once a year the Germanic tribes placed gifts around an oak, so that the children could discover them. They thought that they made the pagan deity happy.

When frustrations build up, Zahirs appear. So, we didn’t think about how to solve the problem – we were fixed on his image.

It is one thing to follow your dreams, and believe in the signs that guide the way: we have a definite goal, but we enjoy the trip. In the case of Zahir, there is no such joy with every step taken, only the anxiety of stubbornly getting what we think is necessary in our lives.

Because of the tengri tradition of this country, which, although very old, still has much to teach us. It is spirituality without formal religion. This tradition, which is basically to worship the miracle of everyday life, allowed the nomads and the people who lived there to survive the impact of established religions. Recently I was in Spain, I had gone to a mass, but at the time of the sermon I went out and looked at the landscape around me. I realised that there was a speaker that delivered the priest’s messages, but the analysis of the gospel made a lot more sense because I was on top of a mountain, looking down at the world, the manifestation of the miracle of being alive.

Like a dip in my unconscious. I allow myself to be guided by the questions that my soul asks, but that the mind has not yet understood correctly. In the process of writing, I discover my own answers.

Each book is different, and expresses a particular state of my soul. What characterises my books is not so much the theme, but the style – to be direct, without being superficial.

As I travel, I read e-mails from readers, give lectures, I realise that the book today is as important as music was for my generation.

I think that the intellectual can be a celebrity, and should treat it respectfully, without prejudice, trying to use fame to improve the current state of the world. There are several good examples, like Pete Gabriel, or Bono.